Diana, Scorn of the Moon

Pending the completion of some further testing on PBE, Diana will be released at a future date
I guess this is gonna be the consistent thing now? Not complaining, better late than ontime but broken
Amumu
Cursed Touch (Passive)
Duration reduced to 3 seconds from 4
Tantrum
Mana cost reduced to 35 from 50
Bandage Toss
Ability Power ratio reduced to 0.7 from 1.0
Curse of the Sad Mummy
Ability Power ratio reduced to 0.8 from 1.0
The mana cost reduction is awesome because it'll make jungle Amumu be less of a blue buff whore. This buffs his earlygame and nerfs his lategame.
Brand
Pyroclasm
Missile Speed increased to 1000 from 800
Missile Speed no longer increases when hitting ablaze targets
If Pyroclasm strikes an ablaze target, the next bounce will now prioritize champions
maybe he'll be viable mid again

Cho'gath
General
Magic Resist per level increased to 1.25
Attack Range normalized to 125 from 130
Rupture
Cast time reduced to 0.5 seconds from 0.672
Delay normalized to 0.625 seconds from 0.5 - 0.75
Feral Scream
Cast time reduced to 0.5 seconds from 0.6417
Vorpal Spikes
Width now increases based on Cho'gath's size
Feast
Now grants Cho'gath up to 50 additional Attack Range, based on Feast rank and amount of stacks
Cast time normalized to 0.5 seconds from 0.43
Range increased to 150 from 100
Buffs that make him make sense. Will improve his QoL
Evelynn
General
Recommended items on Summoner's Rift now include Boots of Mobility
Shadow Walk (Passive)
Restealth duration reduced to 6 seconds from 8
Dealing periodic damage (ie: Ignite) no longer prevents her from restealthing
Agony's Embrace
Cooldown reduced to 120/100/80 seconds from 150/120/90
I think they'll finally have her where they want her with this buff. She'll be pretty balanced.
Hecarim
Devastating Charge
Now more responsive when colliding with opponents
Initial Movement Speed bonus increased to 25% from 0% (still reaches max speed at the same time)
Onslaught of Shadows
Enemy flee speed is now higher based on how close the enemy is to Hecarim
Same thing I said about cho'gath
Janna
Zephyr
Ability Power ratio reduced to 0.6 from 0.8
Fixed: Janna will no longer sometimes retain the passive bonuses while Zephyr is on cooldown
yesss bring balance to botlane. Just kidding, she didn't even need this nerf. Alistar and Blitzcrank have more/better CC, Soraka and Sona have better sustain, and now nunu pokes better. She still has the awesome shield and is a good/well-rounded first/second pick, but she didn't need a nerf.
Lulu
Wild Growth
Fixed: Now completes its effects even if the allied target was about to take lethal damage at the time of casting
bugfixes=good.
Rammus
General
Now gains 1.25 Magic Resist per level

Rumble
Junkyard Titan (Passive)
Danger Zone damage bonus reduced to 25% from 30%
Flamespitter
Damage reduced to 90/160/230/300/370 from 90/180/270/360/450
Fixed: Flamespitter no longer lasts slightly longer than intended
much needed nerf
Twitch
General
Base Attack Damage increased to 52 from 50
Venom Cask
Missile Speed increased to 1400 from 1300
he's still played just as rarely as he was pre re-work. hmmm.
Urgot
Acid Hunter
Damage adjusted back to 10/40/70/100/130 (+0.85 total Attack Damage) from 50/80/110/140/170 (+1.2 bonus Attack Damage)
good. they definitely over did it a bit last patch.
Xin Zhao
General
Base Attack Damage reduced to 55.3 from 59
Attack Damage per level increased to 3.3 from 3
Audacious Charge
Damage reduced to 70/110/150/190/230 from 70/115/160/205/250
I like this. He'll still be a strong pick without being total rape.
Yorick
Omen of Famine
Ravenous Ghoul will only heal Yorick for 50% the damage it deals to minions
Omen of Death
Fixed: The Revenant no longer instantly dies upon casting Omen of Death on an allied Evelynn
the sustain nerf will be interesting. It'll give some other top lanes an edge on one of the strongest tops in the game and allow him to be counterpicked.
Proving Grounds
Repositioned Health Relics so players are less likely to unintentionally walk through them
Adjusted Nexus turrets
Nexus turrets reduced from two to one
Nexus turrets now have an additional 20 Armor, 800 Health, and 30 base Attack Damage
Experience curve adjusted so that levels 14-18 take slightly longer to reach
haven't even played this map yet lol
General
You can now reset the current audio configuration back to defaults from the audio options menu
Battle Training
The "Buy Boots" quest will now properly fire
The "Defeat the Lizard Elder" and "Defeat the Ancient Golem" quests will now properly fire when playing as Ashe
The tip regarding Champion Ultimate Abilities will now show up properly when playing as Ashe
Soraka Bot and Nasus Bot will no longer get stuck
Updated several Champion art assets including splash art and icons for various Mordekaiser, Cassiopeia, Kassadin, Ezreal, and Ashe skins
Fixed: Summoner's Insight now correctly works with Promote (now correctly grants bonus defensive stats)
Fixed: Custom game bots now lane properly when allied players are jungling
Updated tooltips for Ahri, Annie, Jarvan IV, Leona, Lux and Morgana

New Tribunal Feature
Players punished by the Tribunal will now be e-mailed a "Reform Card" which gives additional details about their case
Damn. Iliked it when people QQ'd about this on the forums and Pendragon made them look retarded

I wrote:Oh wait, increased acid hunter damage across the board. Never mind, keep getting dunked at level 2.

Nexus turrets reduced from two to one

It's a custom only map so people can't really complain about it. At least not and have them heard.

You forgot to comment on this, it's an attempt to make him "viable" again, although IMO he still is and this gives him stronger early game.

gtfo of my /patchnotesreview/ you cancer

Yo the amumu buff is to jungle, I wouldn't go so far as to say his early game is compensated for the ap scaling reduction.

Janna zephys reduc is because Janna is/was the best support. And she was doing that weird mid lane thing.

I didn't even bother to complain about many of your other comments.

Darkgenesis wrote:Yo the amumu buff is to jungle, I wouldn't go so far as to say his early game is compensated for the ap scaling reduction.

I meant early game specifically for jungle mumu. This is a definite nerf to lanemumu

Janna zephys reduc is because Janna is/was the best support. And she was doing that weird mid lane thing.

I didn't even bother to complain about many of your other comments.

Janna may have more disruptive power than Blitzcrank and Alistar, but she is much, much squishier than they are.

No thanks, I prefer to jungle Galio.

he doesn't always play galio... but when he does, he jungles...
he is... the most outrageous man... in the world

itsame273 wrote:he is... the most outrageous man... in the world 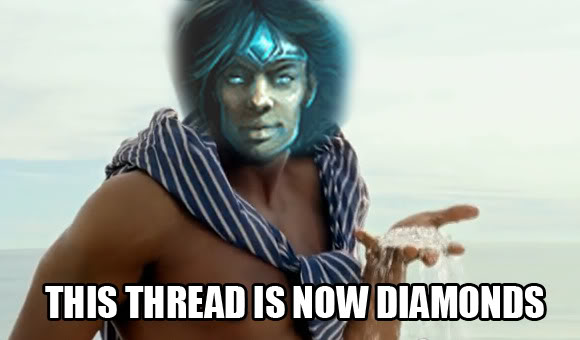