Higurashi Daybreak (ひぐらしデイブレイク Higurashi Deibureiku?) is a Japanese dōjin third person shooter developed by Twilight Frontier, first released on August 13, 2006 and is based on the popular visual novel Higurashi no Naku Koro ni. The game is Twilight Frontier's first attempt in making a 3D game. 07th Expansion, the creators of the original franchise, assisted in making the game — most notably, Ryukishi07, the writer of the original game, provided the script for Higurashi Daybreak. Also, this game uses the same voice cast as the drama CD of Higurashi no Naku Koro ni.

The game is a 2 vs. 2 versus third person shooter based on the system of the Mobile Suit Gundam VS Series. Each of the four players can be played by humans (either together locally or through netplay) or controlled by the computer. Each character has a choice of two to three different weapons, with vastly different properties. Actions such as dashing, guarding, jumping, or flying through the air are restricted by a "stamina" gauge — once that gauge is depleted, none of the said actions can be carried out, though the gauge refills itself when it is not in use. Also, a "charge" and "main" gauge determine what kind of projectile the player fires, and how many he or she can fire. And finally, there is also a "limit gauge" that can be charged in one of two ways: when the player is damaged, or when the player deals damage. Once the gauge is full, the player can go into Hypermode and receive some stat bonuses for a limited period of time. The game ends when a team's balloon reaches a preset limit (default at 100%); the percentage increases when a team member's HP bar gets depleted.

In a peaceful day like any other, a small box was dropped on Rika Furude's head when she was sweeping in the Furude Shrine. In it was a pair of magatama, one red and one white.

The magatama are actually the sacred treasure of the Furude Shrine. With its magical powers, the holder of the red magatama would unconditionally fall for the holder of the white one. Upon testing its effects on the school faculty, the club members of a Hinamizawa school decided that they should duel each other to see which pair gets to keep the magatama. In the beginning it was only an afterschool club activity, but their game eventually engulfed all of Hinamizawa.

Every character has their own unique weapons, and such, most of which are from the series. The expansion gives everyone new weapons and adds a few characters and such as Hanyuu and the manga-only character Natsume. I haven't been able to get this to work on Windows 7, but I'm uploading it anyway for you guys to have a go at it, since most of you use XP.

Installation Instructions:
Download all 15 main parts and the patches from my mediafire.
The rest is from someone else's video, because I'm lazy.


Windows Vista/7 Fixes (These only fix the expansion, not the vanilla game)

A shaded square box covers the ground around the character during matches. (Resolved - Turn Shadow Effects off)
Menus take a long time to load and freeze/lag whilst loading. Once loaded however, they function fine. Game also crashes or freezes during gameplay. (Resolved -

Open Task Manager, go to Processes menu and set the executable affinity to use only one.

Open Start Menu, select Run and type "msconfig". Open startup tab, advanced options, and set the number of cores to 1. Restart Windows after this. (This method takes longer, but is more efficient)

2. Run the executable file from the archive you downloaded and extract it anywhere you want.

3. Run 3DAnalyze.exe and the main configuration window will be displayed.

4. Click the big "SELECT" button, and select the game executable, or daybreakDX.exe.

5. Look for the Pixel and Vertex Shader section. Check the box for "force max. pixel shader version 1.4". You don't need to touch the rest of the options.

6. Click on the big "RUN" button now to run the game. Now it should be fully playable, even in Full Screen mode.

7. To run the game with this setting automatically, click the small "save batch file!" at the bottom after doing step 5. Type in a name that is easy to recognise, eg: daybreak.bat, and save it, preferably in the game folder. Now whenver you want to play the game, simply run daybreak.bat (or whatever you named it).

I got this information from the Higurashi Daybreak Wiki, but I added in my download link if you don't want to deal with theirs. 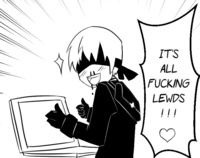 Very good find. I will sticky.

All parts are now uploaded! If anyone figures out how netplay works then I'll put that in the description too.