Anyways this is for comparisons and contrasts between Higurashi and Umineko, make sure you use spoiler tags and mark which episodes they're from.

First off, I'll do a comparison of the characters. Higurashi has only 5-6 core characters and less than 20 characters total including even the minor ones. most of the other characters are only introduced in the answer arcs.
Entire Higurashi Cast(No idea why rika is there twice, NO I WILL NOT ANSWER QUESTIONS ABOUT THAT LITTLE GIRL, tell me if the pic is missing anyone amos and hector)

Umineko had 18 people from the start, the Ushiromiya family and servants, then just kept piling more and more on every single episode. I think the total is around 55 plus or minus the various alter forms of some characters. Ugh. I could not find any picture with every single character, so here are the super pro realistic pics some really awesome guy (for realz) made, it has all the characters up to episode 6. WATCH OUT ZOMG SPOILAR
Episodes 1-4 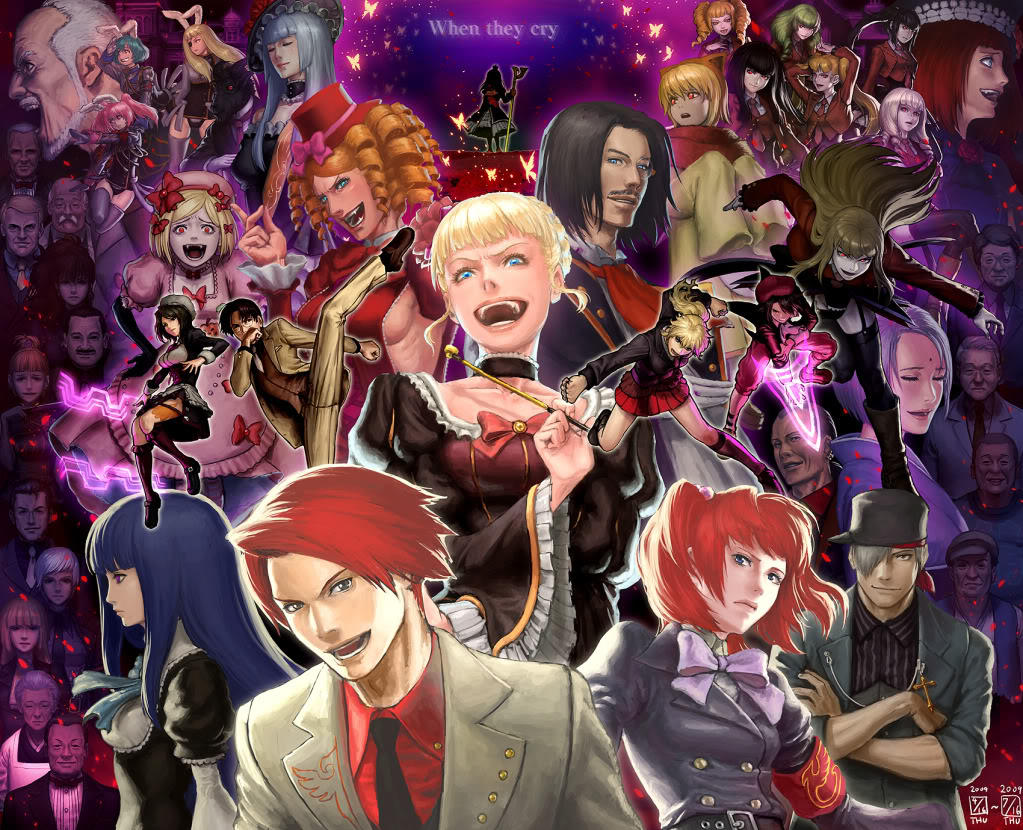 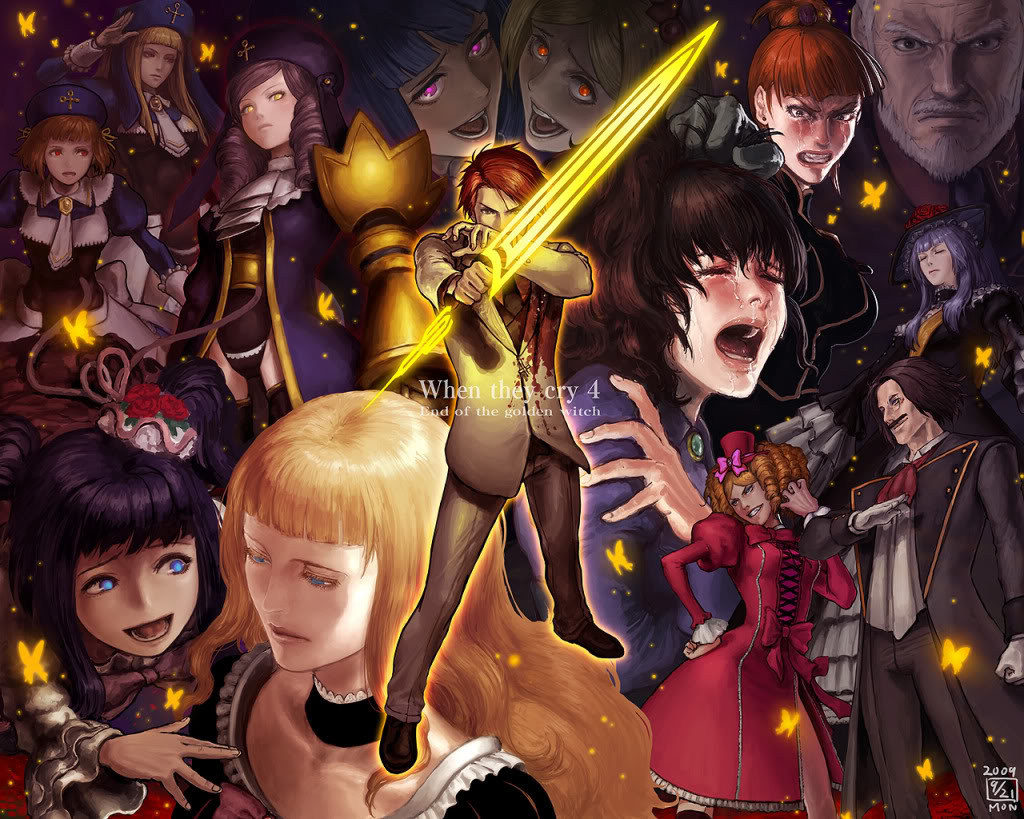 This last one is the cover art for Episode 7, and it is NOT in pro art style, its the same QUALITY art in the previous visual novels. I couldn't find any other pic with all the new characters in episode 7 on it. Again, watch out zomg spoilar.

yeah should be pretty obvious to you by now, despite his apparent improvements by requiem, ryukishi07's art still fails. At least the higurashi sprites were touched up and polished for actual use in a VN, the umineko sprites look just like they took a rough sketch and colored it.

Ok, now I'll go over some basic cross overs from higurashi into umineko. First we have a fairly obvious one that couldn't be interpreted openly and is not a spoiler: Tetsuro Okonogi. He makes a cameo in Episode 4, and those 3 years since higurashi sure have made a difference, he looks COOL now:

Also, Jirou Tomitake looks a lot like George. George even has a shirt that says "Tomitake Free" on it. I'm not really sure why.
Instead of the old man posing the reason and human culprit side like Ooishi does in Higurashi, we have mad black magician "I wouldn't put it past" Kinzo-dono. Oh yes. OH DESIRE. YAMI WA KIRIS- uh, sorry. back on topic. Personally I don't think Maria has any equivalent in Higurashi.
Then we have the witch forms which are very debatable but are unquestionable in physical appearance. Problem Amos?
I will put up my speculations below. WATCH OUT, SPOILERS FOR HIGURASHIFAGS AND UMINEKO EPISODE 2!!!(this means you michael and quan)

EPISODE 7 SPOILARS(probably excludes everyone except hector, PLEASE DO NOT READ IT IF IT WILL SPOIL YOU UNLESS YOU ARE AMOS) I swear reading this will spoil you for the entire when they cry series.

Willard H. Wright is himself.