I don't know why I haven't posted this here sooner, maybe I've just fallen out of the habit of posting stuff I watch. 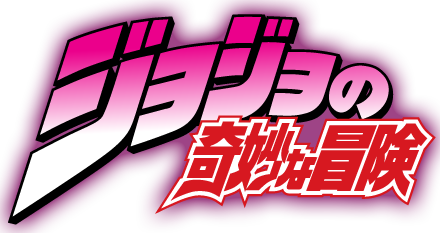 The series known as Jojo's Bizarre Adventure is no mere commercial work of fiction.

It is a cultural phenomenon, having infected the minds, bodies and souls of millions across the globe.

It's given rise to countless shout outs, cameos, references, and memes in the three decades (and counting!) since it has first graced this earth.

It's so big that many of the songs and artists it referenced have heard of it and now refer back to it in some sort of ouroboros/mobius double reacharound reference circle.

IT'S SO POWERFUL, IT CAN TURN OFF THE SUN!

Well not really. Not yet, anyway. This super series really deserves its own section, even its own forum(though there are probably plenty out there made by others), and it might get what it deserves, if I can rope you all into seeing it. Is your body ready for my crazy, noisy, Bizarre summary pitch? 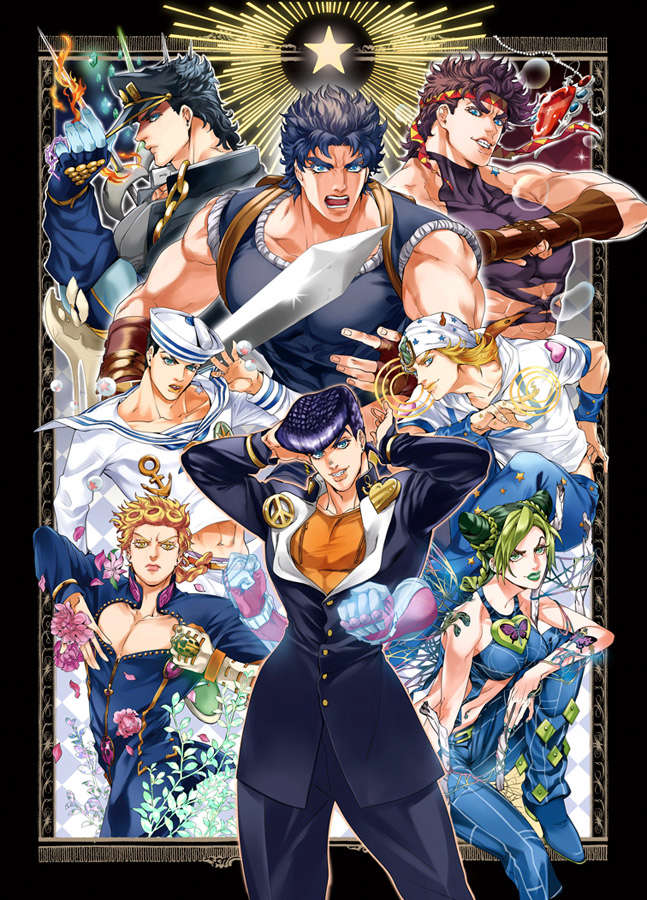 (these are all main characters by the way)
How to describe this masterpiece? Many find themselves at a loss for words. Some would say JOJO is about the human fighting spirit, determination, and surpassing your limits to become greater. The author and manga artist, Hirohiko Araki, has been quoted as saying it's about passing the torch to the next generation.

"But that's all just touchy-feely literary analysis crap!" you object, "What's it actually about?" I'll give it to you, straight as I can.

JOJO NO KIMYOU NA BOUKEN is a shonen/seinen series featuring high energy duels with weird superpowers, weirder situations, and the weirdest gambits(one might even say they're...bizarre

).
There's more ridiculously ripped musclemen, gratuitous engrish, and Western cultural references than you can shake a stick at. It's not a comedy though, at least not primarily - it's filled to the brim with HARDCORE BRUTALITY. It began as a simple black and white manga published in Shonen Jump magazine in 1987, and has since grown to spawn quite a few anime adaptations, video gaymes, and spinoffs.
Plotwise, it details the journeys and struggles of the Joestars and their descendants as they do epic battle with supernatural forces of evil across the years.
It's composed of several "Parts", each Part having a new JoJo as the protagonist and a new story arc. This was supposed to make it easy and accessible for new readers/watchers who are just getting in at the most recent chapter. In my not-so-humble opinion you'll only gain TRUE UNDERSTANDING by going through the whole shebang beginning to end.

Parts 1 through 6 comprise the "original universe" and thus the original series IMO.

Regarding the format in which you should embark on your own Bizarre Adventure: The path that I, Corenat, took was most enjoyable, and you may follow it as well.
First watch the david production animu adaptation of parts 1 through 4, which is completely faithful to the mango. Season 1 contains both Parts 1 and 2, Season 2 & 3 is all Part 3, Season 4 is Part 4. From there you can read the fully translated and colored manga of Parts 5, 6 and 7.
Alternatively, you can go all manga all the way.

I haven't played any of the video games yet, but I'll make a thread when I do.

Comments? Reviews? Favorite Stand? Can someone get a LEGIT GET link for the animu?

Unpopular opinion, I like one & two better than three (still gotta finish it got part way through then stopped). Was basically Castelvania the anime, before we had Castlevania the anime anyway, and imo had a more likeable cast. Also I do somewhat dislike stands, they started out tame enough, but as the series went on they got too crazy.

Well, I'm not saying Stardust Crusaders doesn't have its flaws, but what is it that you don't like about it? The villain of the week format?
I'm in agreement with the popular opinion that Stands have a lot more potential and versatility to work with than Hamon, which is why the latter is unfortunately not present in any of the later Parts. And what do you mean they got too crazy?

Just look up some of the later stands, they do tend to get more ridiculous compared to stardust crusader ones. While it is one that I sounds pretty useful and awesome, there is a stand that can create zippers on things it punches.

Not saying I don't like it, just liked the earlier ones more, more the second part than the first. And villain of the week does get tiring.

Yeah I've read that part(I'm on Part 7 atm so I've seen most of them), and the zippers definitely see a lot of use. My limits are somewhat higher than yours, I don't think any of them are too crazy besides the final boss ones at the end of the arcs.

I need a HQ download link for that Awaken remix.

Nvm the uploader graciously provided it in the comments - http://www.mediafire.com/file/4rn47h1w8s8wk7g/JJBA+Part2+-+Awaken+%28Simpsonill+Remix%29+ver2.mp3

An organism that can have sex with anything it encounters https://imgur.com/HEHFUBE
The dick is extremely important https://pbs.twimg.com/media/Bs_QSJQCMAAuCJW.png